When it comes to selling your property, first impressions are everything. Property specialist from Breakfast Point Realty, Stephanie Galante, sits down with interior stylist, Melita Bruvelis, to get her expert pre-sale design tips

Next to Breakfast Point’s pristine, lush green cricket oval, at the highest point of the community, sits a simple, but superbly reverent tribute reflecting a horror the majority of Australians will thankfully never know. There, set into an elegant sandstone base, stands a memorial to the 45 employees of the area’s original AGL Gasworks who lost their lives in the Great War. Beside that bronze plaque, is a second dedicated to those who fought in the Second World War, with a third nodding to all other conflicts and the personal sacrifices of those who served in them.

“I’m a committed pacifist, because war only occurs after diplomatic efforts have failed, but… I think it’s very appropriate that we remember the dead and the fallen,” says local resident, Group Captain (William) Stuart McAllister (now retired), who served as an operational pilot in Australia’s Air Force for 33 years, including time in Vietnam (1966-67), New Guinea (1975-77), and at the High Commission in London (1986-88). “The old gasworks memorial was in a different location, ignored and run down before it was relocated. Today, our community goes out of its way to maintain it properly and keep the surrounding areas in good condition.”

“It was [Breakfast Point developer] Bob Rose who suggested we create a replica of the original AGL worker plaque that had been stolen,” says Peter Marshall (pictured above), former president of the Breakfast Point Executive Committee, of the current memorial dedicated in November 2010 by Her Excellency the Governor of NSW, Professor Marie Bashir. To Peter, the first dawn service they held beside it on Anzac Day 2011 was just a natural progression, but as he lowered the flag to half-mast in front of just three dozen locals that year, he never imagined that within several more the crowd would be close to 700.

“People come from all over now,” he says of the service, “but we try to make it interesting for locals with a brief historical talk, too. At the first service, researcher Greg Maunsell spoke of a Concord-born soldier who lost his life in the Great War on a piece of ground no larger than our Breakfast Point cricket oval. Three thousand men lay dead there in a matter of days. His words were graphic but good – everyone knew the street where that soldier had lived with his mum.” 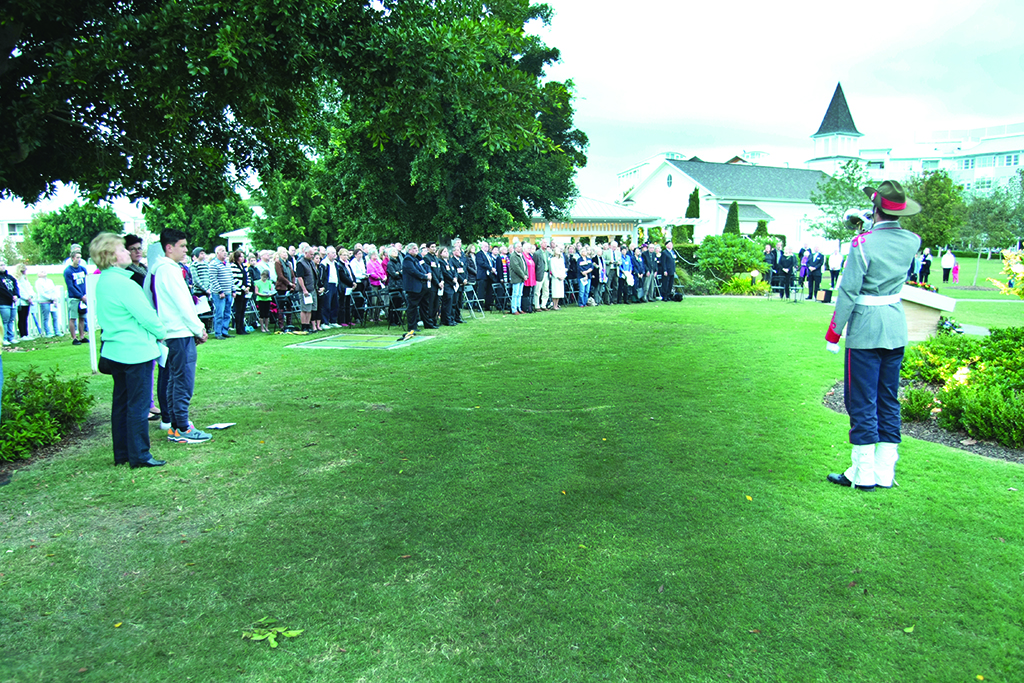 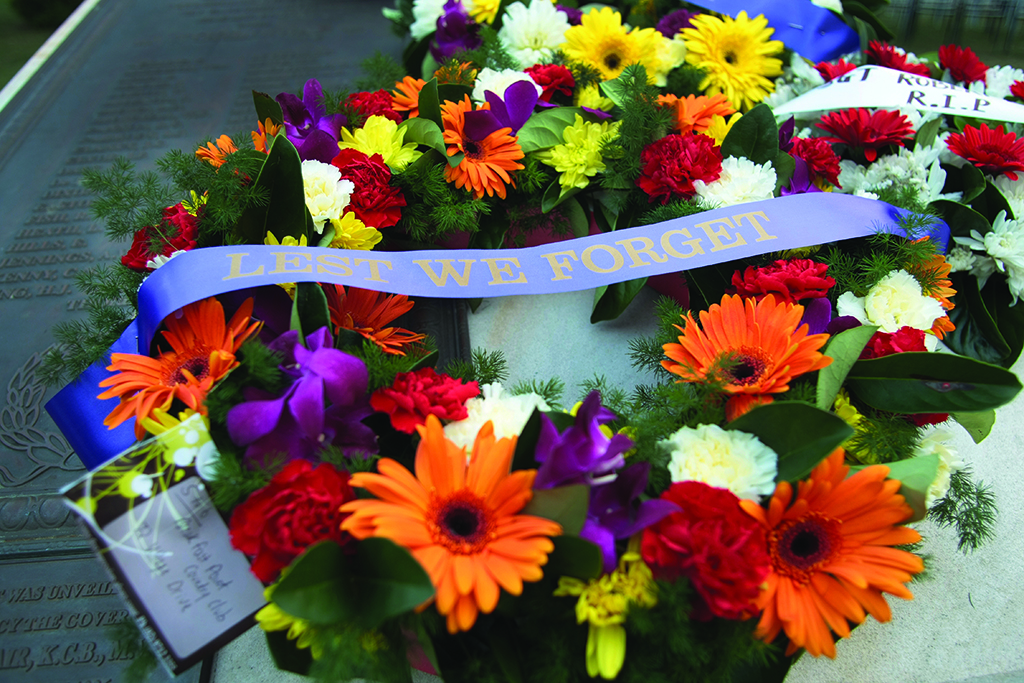 Today’s dawn services may be larger and more structured, but it has retained the same sense of reverence and personal meaning. Peter, who is still flag bearer for the service, recalls the story of local resident and Vietnam veteran, Bobby Beasley, “a great bloke, totally blind, a truly fine man. He remembered the gunfire breakfast he had in his artillery days was rum, so he’d always bring a bottle along with him”.

“Another Breakfast Point family – Richard Grainger and his wife – gave me a package with a letter from his grandmother saying she wanted him to have the Australian flag inside. She wrote that it was a very lucky flag because she’d flown it in her front yard at North Parramatta every day of the war, and all three of her sons who went to fight – Richard’s father being one of them – had come back alive.

That’s now the one we fly in the dawn service.” 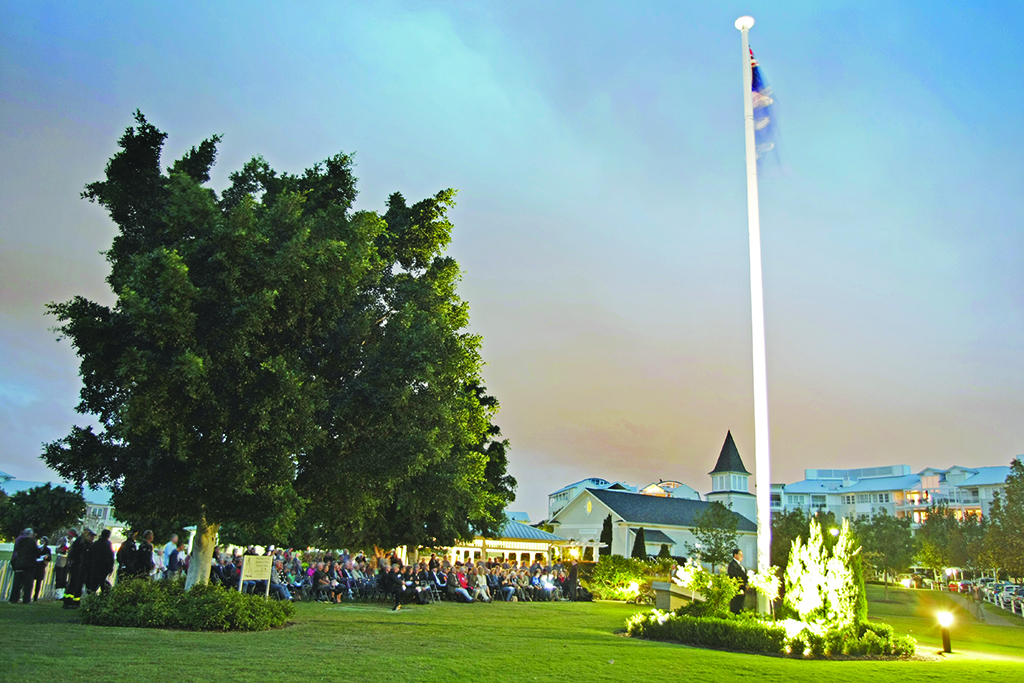 “Unfortunately, over the past 20 years, Anzac Day has degenerated into more of a social occasion, like Australia Day, and we’re losing track of the meaning of it,” says Group Captain McAllister, who retired from the armed forces in 1995 before acting as head of NSW General Aviation.

“The main benefit to any dawn service is that it helps the public remember war is barbaric, so we do our best to avoid it. War is serious stuff.”

It’s also an important chance to show support to those in our midst still living with war’s after-effects, he says. “The Community Association has been kind enough to direct the money donated at the dawn service to Legacy. We all knew families growing up that no longer had a father after the world wars. I’m a member of Sydney Legacy and help look after 42 widows at the moment whose husbands died or were left seriously ill during WW2 or Vietnam. We still have some 9000 war widows in the Sydney area, and I spend most of my spare time trying to help them because they no longer have adequate support.”

While 2020’s COVID challenges saw the last dawn service scaled down, this year’s event is back and perhaps more meaningful than ever. Members of the public are welcome to join the service, followed by a gold coin donation barbeque breakfast, and encouraged to arrive by 5.30am so they’re comfortably settled before the sun rises. “It really is a moving and most satisfying service,” notes Peter. “And, of course, very convenient for all Breakfast Point residents.”

The Publican & The Palace

Just the two of us